Owens and Bradbury will be based out of the bank’s location on West Capitol Avenue in Downtown Little Rock. The pair bring combined experience of nearly 50 years to the already seasoned staff. Read more about these two new lenders at FNB.

The Arkansas State Police Foundation (ASPF) Chairman's Award is given to an individual or organization, selected by the ASPF Chairman, who has aided the Arkansas State Police Foundation Board of Directors by greatly contributing to the work of the Foundation. First National Bank received the Chairman's Award at the 2018 Annual Awards Banquet held on Thursday, October 25th at the Governor's Mansion. Will Brewer, Vice Chairman accepted this award and is photographed with Joe Thielke - Vice Chairman and Frank Guinn - Chairman.

54 teams, 216 golfers and many generous sponsors came together to raise needed funds for the Arkansas State Police Foundation during the 2nd Annual Golf Tournament on Thursday, August 16, 2018 at the Paragould Country Club. The proceeds of the 4-person scramble is going toward the ASPF Precision Driving Track *Project at Camp Robinson.   Thank You to every team, golfer and sponsor for their involvement and support.   Funds raised this year were several thousands of dollars above the sum raised during the 2017 event.  FNB is delighted to have served as tournament host and to have covered the expenses of the tournament.   Our hope is that the funds raised during the tournament will benefit all the citizens of the state of Arkansas and beyond!
More about the *Project:   Arkansas is one of 3 states that has not had a precision driving track for their troopers to utilize during training.  Since the State Police collectively  drive approximately 13,000,000 miles a year this is a much needed asset to ensure the safety of not only the troopers, but also everyone that shares the road. Construction of the Precision Driving Track is well underway.  Phase 1 will provide the 5 lane "runway" for the State Police to practice high speed maneuvers.  The track will also be made available to first responders including: police, fire and ambulance so that they may be able to learn advanced driving techniques in a safe controlled environment.

On January 1, 2018 the Arkansas State University Convocation Center officially became the First National Bank Arena. The announcement was made by ASU System President Charles Welch who said "A-State is extremely grateful to the bank for their generosity and significant support," and added "This is certainly a very exciting day for our university and community." You may read the ASU press release here .

To view the 16 minute video of the ASU announcement click the ARENA logo above. In the video, ASU trustees approve the re-naming and then ASU officials explain the significance of the FNB donation. First National Bank Vice-Chairman Will Brewer also speaks to expresses how the bank is "honored and excited" for this opportunity to partner with ASU. 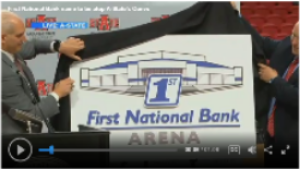 You may also view a story from  KAIT8 News  about the announcement on October 19, 2017 on the floor of the arena. In this story you will read comments from A-State Athletic Director, Terry Mohajir regarding the many upgrades that have recently been made to this landmark and multipurpose facility at ASU.

The Arkansas State Police Foundation held its Annual Appreciation Dinner on Tuesday, October 17, 2017 at the Governors Mansion in Little Rock. During the event, the Arkansas State Police Foundation honored First National Bank Chairman Bill Brewer with the Trooper Ermon Cox Award . This is the highest award presented by the Foundation. Only a handful of these awards have ever been given out. If you know Bill, you know his extreme passion for giving and supporting our local communities and our state. Congratulations on this very much deserved award!

Also honored during the dinner was, First National Bank's Neely Camp who received the Chairman's Award.  This annual award is given in recognition of exemplary service by an advocate and supporter of the Arkansas State Police. Neely recently spearheaded the first ever Arkansas State Police Foundation Golf Tournament, an event which raised nearly $60,000 for the ASP Foundation. Neely also serves the on the Board of Directors of the ASP Foundation. FNB is also very proud of Neely and her service to the community and our state.

FNB salutes the brave men and women of the Arkansas State Police for their unselfish service to protect us all.

A "topping out"ceremony for the new First National Financial Park took place on Tuesday, September 12, 2017 at 3500 E. Johnson Avenue in Jonesboro. Those gathered for the event included: bankers, builders, architects and developers. A high-point for this occasion was the hoisting of a special beam up to the highest point of the building's infrastructure, where it was secured into place. This special beam had been signed by the bank's 200+ employees as well as those gathered at the ceremony. Proudly positioned atop the beam was a United States flag and an FNB flag.

We appreciate KAIT8 covering the ceremony. In this 48 second video , KAIT8 interviews Chief Banking Officer Matt Rankin who explains why FNB is expanding at the same address where our first Craighead County facility was built nearly 20 years ago.

On August 17, 2017 over $55,000 was raised by various individuals and organizations throughout Northeast Arkansas and beyond to benefit the Arkansas State Police Foundation.

THANK YOU to each and every sponsor, contributor and golfer who generously gave to benefit this organization. FNB was proud to be the presenting sponsor of this first-ever event. In the photo below, Will Brewer, Vice-Chairman of First National Bank and ASPF Board Member presents a check to Frank Guinn, Board Chairman of the Arkansas State Police Foundation.  Read more about the ASPF 2017 tournament .

In Online Banking or Bill Pay!